Our brand new 2020 model just arrived and has even more upgrades only found at Saturn Rafts including upgraded German Heytex PVC ($75 value) and improved C7 style inflation valves ($50 value)! See the attachments link below to our Heytex PVC brochure. The SATURN KaBoat is for those that can’t decide between a Dinghy and Kayak. This versatile crossover can be used like our SATURN inflatable Kayak by paddling or can be turned into a motorboat by attaching a gas or electric engine to the plywood transom at the stern. Aluminum seats and incredibly stable design make it great fishing vessel and the compact size make for an excellent dinghy for a 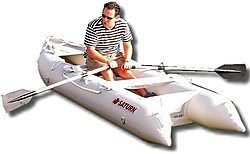 The SATURN KaBoat is capable of transporting heavier cargo and offers a more stable design than that of a traditional kayak. The narrow profile allows for much less drag and allow it to outperform most traditional dinghy’s with similar engine size.

If you get tired, just use an electric or gas engine installed on the marine grade plywood transom. You can use it as an inflatable boat with an outboard engine.

If the battery charge or gas runs low, then use it as a kayak to paddle to your destination. The KaBoat is extremely portable and will fit in a medium size bag. Now you can go on vacation and take your small KaBoat with you, (along with an optional small electric or gas engine). The main benefit is that if you get tired of paddling, then you can use the engine to get back ashore.

The KaBoat's is exceptionally stable design allows you to stand, fly fish or even get into those narrow spots where other boats can't go to get the best fishing. Check at the all new version with upgraded features, a full exterior grommet strip, and added splashguards!

Benefits of KaBoat VS. conventional Kayak or Inflatable Boat: